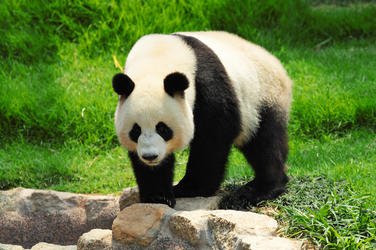 Born pink, blind, and helpless, giant pandas typically weigh about 100 grams at birth -- the equivalent of a stick of butter. Their mothers are 900 times more massive than that. This unusual size difference has left researchers puzzled for years. With a few exceptions among animals such as echidnas and kangaroos, no other mammal newborns are so tiny relative to their mothers. No one knows why, but a Duke University study of bones across 10 species of bears and other animals finds that some of the current theories don't hold up. Duke biology professor Kathleen Smith, PhD, and her former student Peishu Li published their findings this month in the Journal of Anatomy. The article was published online on December 2, 2019 and is titled "Comparative Skeletal Anatomy of Neonatal Ursids and the Extreme Altriciality of the Giant Panda.” Baby panda skeletons are hard to come by, but the researchers were able to study the preserved remains of baby pandas born at the Smithsonian's National Zoo in Washington, D.C. The National Zoo's first panda couple, Ling-Ling and Hsing-Hsing, had five full-term cubs in the 1980s, but none of them survived long after birth. The researchers took micro-CT scans of two of those cubs, along with newborn grizzlies, sloth bears, polar bears, dogs, a fox, and other closely related animals from the Smithsonian National Museum of Natural History and the North Carolina State College of Veterinary Medicine. They used the scans to create 3-D digital models of each baby's bony interior at birth. As a baby animal grows and develops inside the womb, its bones and teeth do also. The researchers examined the degree of ossification, or how much the skeleton has formed by the time of birth.
Login Or Register To Read Full Story
Login Register