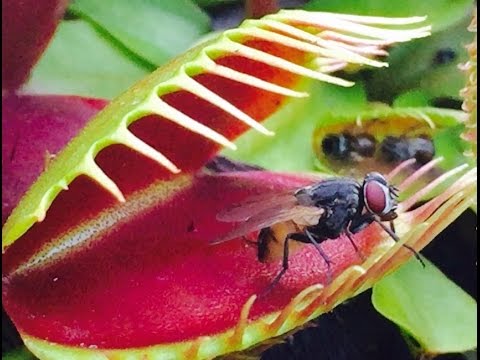 While most people are familiar with Venus flytraps and their snapping jaws, there is still much that scientists don't know about the biology of these carnivorous plants. Researchers have for the first time discovered which insects pollinate the rare plants in their native habitat - and discovered that the flytraps don't eat these pollinator species. Venus flytraps (Dionaea muscipula) are in a genus all their own, and are native to a relatively small area, restricted to within a 100-mile radius of Wilmington, North Carolina. "These findings answer basic questions about the ecology of Venus flytraps, which is important for understanding how to preserve a plant that is native to such a small, threatened ecosystem," says Elsa Youngsteadt, a research associate at North Carolina State University and lead author of a paper on the work. "It also illustrates the fascinating suite of traits that help this plant interact with insects as both pollinators and prey." The paper, "Venus Flytrap Rarely Traps Its Pollinators," was published online on February 5, 2018 in the journal American Naturalist. "Everybody's heard of Venus flytraps, but nobody knew what pollinated them - so we decided to find out," says Clyde Sorenson, PhD, co-author of the paper describing the work and Alumni Distinguished Undergraduate Professor of Entomology at NC State. To that end, researchers captured insects found on Venus flytrap flowers at several sites during the plant's five-week flowering season. The researchers identified each insect and checked to see if they were carrying Venus flytrap pollen - and, if they were carrying pollen, how much.
Login Or Register To Read Full Story
Login Register