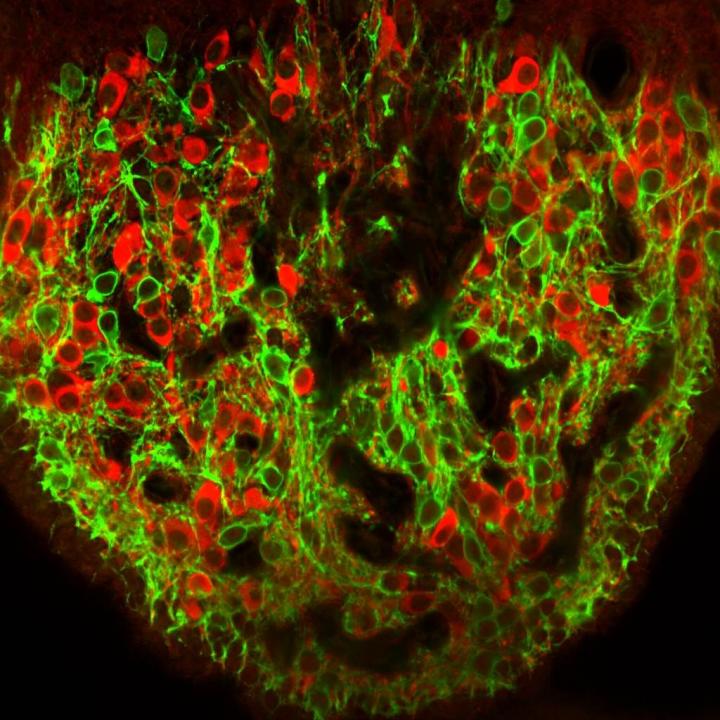 Neurons that trigger our sense of thirst--and neurons that turn it off--have been identified by Columbia University Medical Center (CUMC) neuroscientists. The paper was published online on January 26, 2014 in Nature. For years, researchers have suspected that thirst is regulated by neurons in the subfornical organ (SFO) in the hypothalamus. But it has been difficult to pinpoint exactly which neurons are involved. "When researchers used electrical current to stimulate different parts of the SFO of mice, they got confusing results," said lead author Yuki Oka, Ph.D., a post-doctoral research scientist in the laboratory of Charles S. Zuker, Ph.D., Professor of Biochemistry and Molecular Biophysics and of Neuroscience, a member of the Kavli Institute for Brain Science and the Mortimer B. Zuckerman Mind Brain Behavior Institute, and a Howard Hughes Medical Institute Investigator at CUMC. The CUMC team hypothesized that there are at least two types of neurons in the SFO, including ones that drive thirst and others that suppress it. "Those electrostimulation experiments were probably activating both types of neurons at once, so they were bound to get conflicting results," said Dr. Oka. To test their hypothesis, Drs. Oka and Zuker turned to optogenetics, a more precise technique for controlling brain activity. With optogenetics, researchers can control specific sets of neurons in the brain after inserting light-activated molecules into them. Shining light onto these molecules turns on the neurons without affecting other types of neurons nearby. These "mind-control" experiments revealed two types of neurons in the SFO that control thirst: CAMKII neurons, which turn thirst on, and VGAT neurons, which turn it off.
Login Or Register To Read Full Story
Login Register