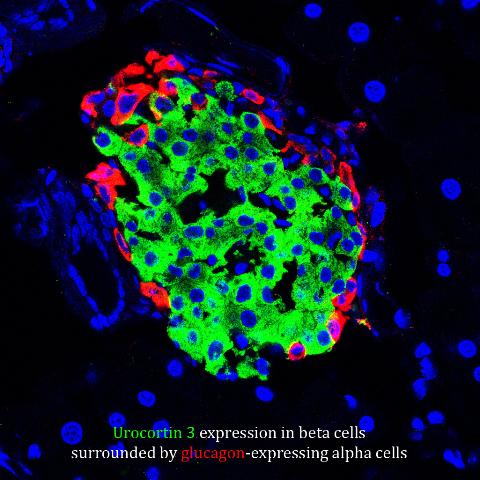 Sometimes, listening in on a conversation can tell you a lot. For Dr. Mark Huising, an Assistant Professor in the Department of Neurobiology, Physiology, and Behavior at the University of California (UC) Davis College of Biological Sciences, that crosstalk is between the cells that control your body's response to sugar, and understanding that conversation can help us understand, and perhaps ultimately treat, diabetes. Dr. Huising's laboratory team has now identified a key part of the conversation going on between cells in the pancreas. A hormone called urocortin3, the scientists found, is released at the same time as insulin and acts to damp down insulin production. A paper describing the work was published online on June 15, 2015 in Nature Medicine. The article is titled “Urocortin3 Mediates Somatostatin-Dependent Negative Feedback Control of Insulin Secretion." "It's a beautiful system," Dr. Huising said. "It turns out that there is a lot of crosstalk going on in the islets to balance insulin and glucagon secretion. The negative feedback that urocortin3 provides is necessary to tightly control blood sugar levels at all times." Diabetes affects millions of Americans every year. Both forms of the disease -- type 1, "juvenile" or "insulin-dependent" diabetes, and type 2 or "adult-onset" diabetes – cause the body to be unable to regulate the level of glucose properly. Diabetes is tied to structures called the Islets of Langerhans in the pancreas. Within the islets, so-called “beta cells” make insulin. Increasing blood sugar stimulates insulin production, which is secreted from the pancreas and causes the body's cells to pull sugar out of circulation. The islets also house alpha cells, which make another hormone, glucagon, which acts on the liver, causing it to release more glucose into the bloodstream.
Login Or Register To Read Full Story
Login Register