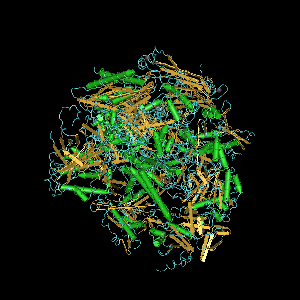 One of biology's most fundamental processes is something called transcription. It is just one step of many required to build proteins—and without it life would not exist. However, many aspects of transcription remain shrouded in mystery. But now, scientists at the Gladstone Institutes in San Francisco are shedding light on key aspects of transcription, and in so doing are coming even closer to understanding the importance of this process in the growth and development of cells—as well as what happens when this process goes awry. In the November 7, 2013 issue of Molecular Cell, researchers in the laboratory of Gladstone Investigator Melanie Ott, M.D., Ph.D., describe the intriguing behavior of a protein called RNA polymerase II (RNAPII) (see image). The RNAPII protein is an enzyme, a catalyst that guides the transcription process by copying DNA into RNA, which forms a disposable blueprint for making proteins. Scientists have long known that RNAPII appears to stall or "pause" at specific genes early in transcription. But they were not sure as to why. "This so-called 'polymerase pausing' occurs when RNAPII literally stops soon after beginning transcription for a short period before starting up again," explained Dr. Ott, who is also a professor of medicine at the University of California, San Francisco, with which Gladstone is affiliated. "All we knew was that this behavior was important for the precise transcription of DNA into RNA, so we set out to understand how, when, and—most importantly—why." The research team focused its efforts on a segment of RNAPII called the C-terminal domain, or CTD. This section is most intimately involved with transcription regulation. Previous research had found that CTD's chemical structure is modified before and during transcription.
Login Or Register To Read Full Story
Login Register