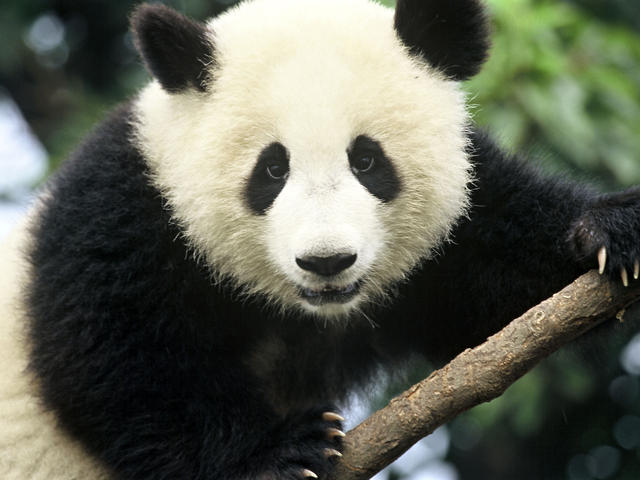 A suite of energy-saving traits, including underactive thyroid glands, allows giant panda bears to survive almost exclusively on bamboo, according to a new study. Dr. Yonggang Nie and colleagues report the first measurements of daily energy expenditure (DEE) in these bears, which do not have stomachs designed for such low-nutrient, high-cellulose plants. The work was published in the July 10, 2015 issue of Science. The article is titled “Exceptionally Low Daily Energy Expenditure in the Bamboo-Eating Giant Panda.” The researchers studied five captive pandas and three wild ones, discovering that the animal's DEE was just about 38% of the average for a terrestrial mammal with the same body mass. The DEE values for giant pandas are substantially lower than those for koalas, for example, and more akin to those of three-toed sloths, according to the researchers. Dr. Nie and colleagues used GPS loggers to track the bears and found that giant pandas are much less active than other bears. Further research revealed that the animal's brain, liver, and kidney are relatively small compared to those of other bears, and that the giant panda’s thyroid hormone levels are only a fraction of the mammalian norm -- comparable to a hibernating black bear's hormone levels. Finally, the researchers compared the giant panda genome to those of other mammals, identifying a panda-specific variation on the DUOX2 gene, loss of which is associated with underactive thyroids in humans. Taken together, these results suggest that particularly low energy expenditures and low thyroid hormone levels enable the carnivorous-looking panda bears to surviving by simply munching on bamboo all day.
Login Or Register To Read Full Story
Login Register