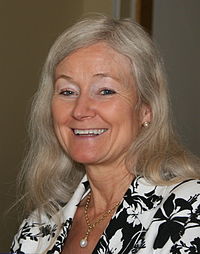 The American Society of Human Genetics (ASHG) has named the UK’s Dame Kay E. Davies, D.Phil., the Dr. Lee’s Professor of Anatomy, Associate Head of the Medical Sciences Division; and Director of the Medical Research Council (MRC) Functional Genomics Unit in the Department of Physiology, Anatomy, and Genetics at the University of Oxford, as the 2015 recipient of the annual William Allan Award. The Allan Award, which recognizes a scientist for substantial and far-reaching scientific contributions to human genetics, was established in 1961 in memory of William Allan, M.D. (1881-1943), one of the first American physicians to conduct extensive research on human genetics and hereditary diseases. Dr. Davies will receive her award, which will include an engraved medal and monetary prize, on Friday, October 9, 2015 during the ASHG’s 65th Annual Meeting (http://www.ashg.org/2015meeting/) in Baltimore, Maryland. She will present her William Allan Award address immediately thereafter. Dr. Davies led early research into Duchenne muscular dystrophy (DMD), a genetic disorder marked by muscle weakness that progresses rapidly. In the 1980s, her research group identified genetic markers that allow prenatal diagnosis and carrier status determination of DMD and mapped the gene coding for DMD to a specific location on the X chromosome. The Davies group also described the gene’s size and deletions in the DNA associated with disease, including a very large deletion of the gene coding for the protein dystrophin found in a patient with mild disease. Follow-up research showed that in mice, introducing the smaller dystrophin gene could prevent disease progression. These observations pioneered the development of dystrophin “minigenes” for the treatment of DMD in people. Dr.
Login Or Register To Read Full Story
Login Register