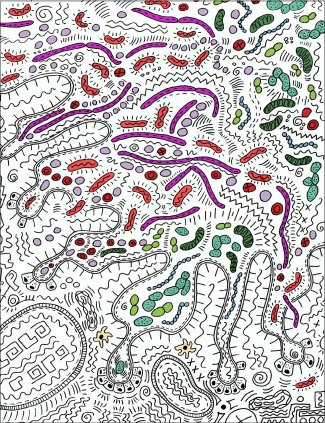 In the largest longitudinal study of the microbiome to date, researchers from the Broad Institute of MIT and Harvard, Massachusetts General Hospital (MGH), and the DIABIMMUNE Study Group have identified a connection between changes in gut microbiota and the onset of type 1 diabetes (T1D). The study, which followed infants who were genetically predisposed to type 1 diabetes, found that onset, for those who developed the disease, was preceded by a drop in microbial diversity, including a disproportional decrease in the number of species known to promote health in the gut. These findings, which were published online on Februar 5, 2015 in Cell, Host & Microbe, could help pave the way for microbial-based diagnostic and therapeutic options for those with T1D. The human microbiome, which consists of the trillions of microorganisms (bacteria, viruses, and other assorted “bugs”) that reside in our bodies, has become an area of growing interest to the medical community as researchers have begun to probe the role it plays in human health and disease. While most bugs in our microbiome are harmless, and even beneficial, changes in the microbiome (and in the interactions microbial species share with their human hosts) have been linked to various disease states, including diabetes and Inflammatory Bowel Disease (IBD). To explore the possible connection between changes in the microbiome and type 1 diabetes, a team led by Dr. Ramnik Xavier, M.D., an Institute Member of the Broad Institute and Chief of Gastroenterology at MGH, followed 33 infants (out of a much larger cohort of Finnish and Estonian children) who were genetically predisposed to T1D. From birth to age 3, the team regularly analyzed the subjects’ stool samples, collecting data on the composition of their gut microbiome.
Login Or Register To Read Full Story
Login Register