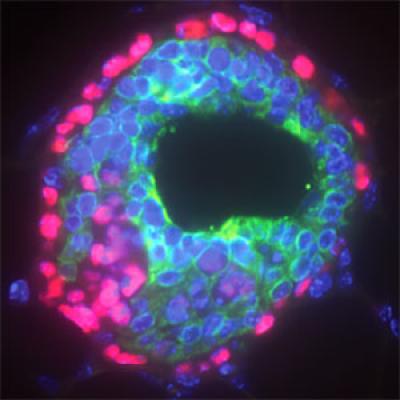 Australian researchers have found that so-called “triple-negative breast cancers” are two distinct diseases that likely originate from different cell types. This helps explain why survival prospects for women with the diagnosis tend to be either very good or very bad. The Sydney-based research team has found a gene that drives the aggressive disease, and hopes to find a way to “switch it off.” The aggressive form of triple-negative breast cancer appears to arise from stem cells, while the more benign form appears to arise from specialized cells. Stem cells have many of the same features as cancers. They are plastic and flexible, and have the ability to proliferate and spread into other tissues - deadly traits in cancers. Previous studies have shown that breast stem cells are needed for breast growth and development during puberty and pregnancy, although how they evolve from stem cells into specialist cells has been unclear. The new study has shown that a gene known as “inhibitor of differentiation 4” (ID4) determines whether a stem cell remains a stem cell, or whether it differentiates into a specialist cell. Notably, when the high levels of ID4 in a stem cell are “switched off,” other genes that drive cell specialization are “switched on.” Dr. Alex Swarbrick and Dr. Simon Junankar from Sydney's Garvan Institute of Medical Research spearheaded this large interdisciplinary study, which employed an ID4GFP knock-in reporter mouse and single-cell transcriptomics to show that ID4 marks a stem-cell-enriched subset of the mammary basal cell population. The study’s main finding, that ID4 not only “marks,” but appears to control, the highly aggressive form of triple negative breast cancer was published online on March 27, 2015 in Nature Communications.
Login Or Register To Read Full Story
Login Register