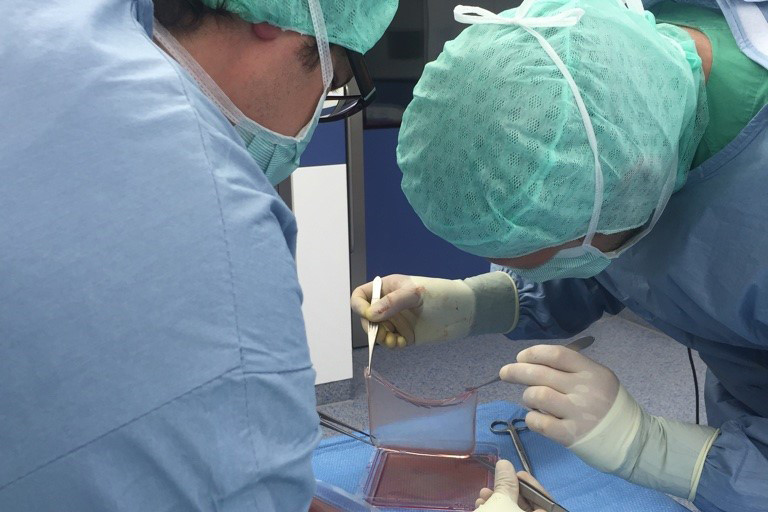 A medical team at the Ruhr-Universität Bochum’s burn unit (Germany) and the Center for Regenerative Medicine at the University of Modena (Italy) is the first ever to successfully treat a child suffering from extensive skin damage using transplants derived from genetically modified stem cells. The boy is a so-called butterfly child: he suffers from epidermolysis bullosa, a genetic skin disease that had destroyed approximately 80 percent of his epidermis. After all established therapies had failed, the medical team from Bochum decided to try an experimental approach: the doctors transplanted skin derived from genetically modified stem cells onto the wound surfaces. Thanks to the successful therapy, the boy is now – two years after the treatment – able to participate in his family’s life and social life. The scientists published their report online on November 8, 2017 in Nature. The article is titled “Regeneration of the Entire Human Epidermis by Transgenic Stem Cells.” Epidermolysis bullosa is the scientific name of a congenital skin disease that is currently considered to be incurable. Its underlying mechanism is a defect in protein-forming genes that are essential for skin regeneration. Even minor stress can result in blisters, wounds, and skin loss with scar formation. Depending on disease severity, internal organs may likewise be affected, leading to critical dysfunctions. The disease significantly reduces the patients’ quality of life; often it is also life-threatening, as in the case of Hassan, the seven-year-old: by the time he was admitted to the pediatric intensive care unit at Katholisches Klinikum Bochum in June 2015, 60 percent of his epidermis had been lost. “He suffered from severe sepsis with high fever, and his body weight had dropped to a mere 17 kilograms (~37 pounds) – a life-threatening condition,” Dr Tobias Rothoeft, Consultant at the University Children’s Hospital at Katholisches Klinikum Bochum, points out. All conservative and surgical therapy approaches had failed.
Login Or Register To Read Full Story
Login Register