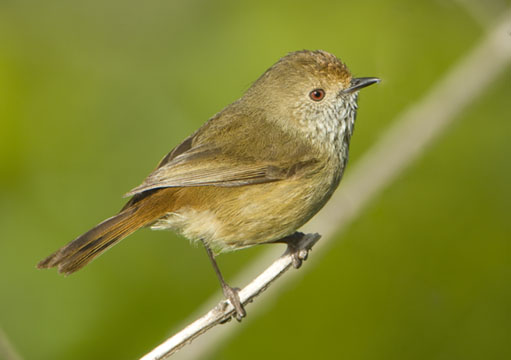 One of Australia's smallest birds has found a cunning way to protect its nest from predators by crying wolf, or rather “hawk,” and mimicking the warning calls of other birds. Researchers from The Australian National University (ANU) and the University of Cambridge (UK) found that the tiny 6-gram brown thornbill mimics the hawk warning calls of a variety of birds to scare off predators threatening its nest, such as the larger pied currawong. "It's not superbly accurate mimicry, but it's enough to fool the predator," said Dr. Branislav Igic, who carried out the study during his Ph.D. work at the ANU Research School of Biology. "A physical attack on a currawong would be no good. They are 40 times the size of a thornbill and will eat adults as well as nestlings.” "I am amazed that such a tiny bird can mimic so many species, some much bigger than itself. It's very cunning," said Dr. Igic, who has now taken up a position at the University of Akron, in Ohio, in the United States. This research was published The research, conducted by scientists was published online on June 3, 2015 in the journal Proceedings of the Royal Society B. The article is titled “Crying Wolf to a Predator: Deceptive Vocal Mimicry by a Bird Protecting Young.” Although vocal mimicry is widespread amongst birds, its function is rarely understood. This study is the first to show that birds use vocal mimicry to scare predators. The researchers stumbled across the thornbill's deceit during an experiment on birds' reactions to a stuffed owl, said Professor Robert Magrath, the leader of the research group at the Research School of Biology. "I was puzzled because I could hear the alarm calls of robins, honeyeaters, and rosellas, but I couldn't see any," he said.
Login Or Register To Read Full Story
Login Register