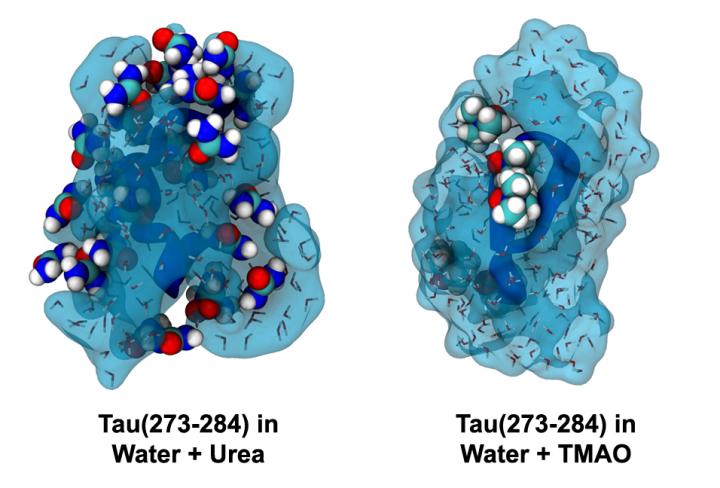 Like the shape-shifting robots of "Transformers" fame, a unique class of proteins in the human body also has the ability to alter their configuration. These so-named “intrinsically disordered proteins” (IDPs) lack a fixed or ordered three-dimensional structure, which can be influenced by exposure to various chemicals and cellular modifications. A new study by a team of University of California Santa Barbara (UCSB) scientists looked at a particular IDP called “tau,” which plays a critical role in human physiology. Abundant in neurons located in the nervous system, tau stabilizes microtubules, the cytoskeletal elements essential for neuronal functions such as intracellular transport. Lacking a fixed 3-D structure, tau can change shape so that it forms clumps or aggregates, which are associated with Alzheimer's disease and related dementias. The researchers' findings were published online on February 17, 2015 in PNAS. "In the brain, these proteins need to change shape very rapidly to adapt to different conditions," said co-author Dr. Joan-Emma Shea, a professor in UCSB's Department of Chemistry and Biochemistry. "It's important to understand the relationship between protein shape and function and how you can change the shape. So we used these external agents, small molecules called “osmolytes,” to affect the shapes, or conformations, of these proteins." The researchers not only conducted biological experiments, but also ran computer simulations to understand how these small molecules change the shape of tau and, when they do so, how it affects the protein's ability to aggregate. They found that tau's structure--whether extended or compact--was associated with how easily it bound to other tau proteins to promote the aggregation process.
Login Or Register To Read Full Story
Login Register