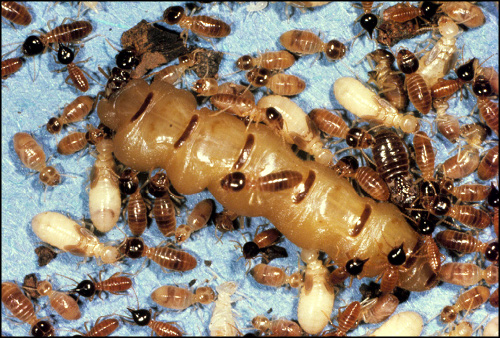 Researchers at North Carolina (NC) State University have, for the first time, identified a specific chemical used by the higher termite castes -- the queens and the kings -- to communicate their royal status with worker termites. The findings could advance knowledge of termite evolution, behavior, and control. A study published online on March 19, 2018 in PNAS shows that a wax-like hydrocarbon -- a chemical consisting of only carbon and hydrogen atoms called heneicosane -- on the body surface of subterranean royal termites is used to enable worker termites to recognize and care for them. The open-access article is titled “"Identification of a Queen and King Recognition Pheromone in the Subterranean Termite Reticulitermes flavipes.” Termites live mostly underground or in wood and are generally blind, necessitating the use of chemical signals to communicate. "This is the first report of a queen recognition pheromone in termites and the first report of a king recognition pheromone in insects," said Coby Schal, PhD, the Blanton J. Whitmire Distinguished Professor of Entomology at NC State. Dr. Schal and NC State Ph.D. graduate Colin Funaro, the paper's co-corresponding authors, used gas chromatography to isolate specific chemicals from the exoskeletons of royal and worker Reticulitermes flavipes termites and found heneicosane on the royal termites, but not on workers. When heneicosane was placed on glass dummies serving as royal termite proxies, workers did not bow or curtsy, but instead started shaking -- an action that seemed to reflect the termite version of royal recognition. Workers shook even more when the royal pheromone was blended with other hydrocarbons from the colony's workers that represent the colony's odor.
Login Or Register To Read Full Story
Login Register