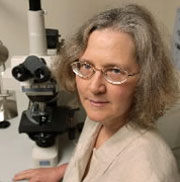 Three scientists who combined to identify the end structures of chromosomes and the enzyme that maintains these structures have been awarded the 2009 Nobel Prize in Physiology or Medicine. The prestigious award went to Dr. Elizabeth Blackburn (photo) of the University of California-San Francisoc, Dr. Carol Greider of Johns Hopkins University, and Dr. Jack Szostak of Harvard Medical School. Blackburn, Greider, and Szostak performed their groundbreaking investigations in the late 1970s and the 1980s. Blackburn showed that simple, repeated DNA sequences make up chromosome ends and, with Szostak, established that these repeated sequences stabilize chromosomes and prevent them from becoming damaged. Szostak and Blackburn predicted the existence of an enzyme that would add the sequences to chromosome ends. While a graduate student with Blackburn, who was then a member of the faculty at the University of California-Berkeley, Greider tracked down the enzyme telomerase. She later determined that each organism's telomerase contains an RNA component that serves as a template for the creature’s particular telomere DNA repeat sequence. In addition to providing insight into how chromosome ends are maintained, Blackburn, Greider, and Szostak’s work laid the foundation for studies that have linked telomerase and telomeres to human cancer and age-related conditions. Subsequent research has shown that telomerase and telomeres play key roles in cell aging and death and also play a part in the aging of the entire organism. Research has also shown that cancer cells have increased telomerase activity, protecting them from death. The award was announced on October 5.
Login Or Register To Read Full Story
Login Register