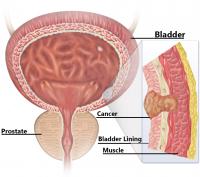 Investigators with The Cancer Genome Atlas (TCGA) Research Network have identified new potential therapeutic targets for a major form of bladder cancer, including important genes and pathways that are disrupted in the disease. They also discovered that, at the molecular level, some subtypes of bladder cancer – also known as urothelial carcinoma – resemble subtypes of breast, head and neck, and lung cancers, suggesting similar routes of development. The researchers' findings provide important insights into the mechanisms underlying bladder cancer, which is estimated will cause more than 15,000 deaths in the United States in 2014. TCGA is a collaboration jointly supported and managed by the National Cancer Institute (NCI) and the National Human Genome Research Institute (NHGRI), both parts of the National Institutes of Health. "TCGA Research Network scientists continue to unravel the genomic intricacies of many common and often intractable cancers, and these findings are defining new research directions and accelerating the development of new cancer therapies," said NIH Director Francis Collins, M.D., Ph.D. In this study, published online on January 29, 2014 in an open-access article in Nature, investigators examined bladder cancer that invades the muscle of the bladder, the deadliest form of the disease. The current standard treatments for muscle-invasive bladder cancer include surgery and radiation combined with chemotherapy. There are no recognized second-line therapies – second choices for treatments when the initial therapy does not work – and no approved targeted agents for this type of bladder cancer. Approximately 72,000 new cases of bladder cancer will be diagnosed in the United States in 2014.
Login Or Register To Read Full Story
Login Register