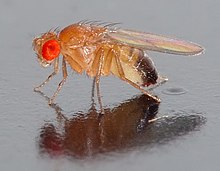 Scientists have delved more deeply into the evolutionary history of the fruit fly than ever before to reveal the genetic activity that led to the development of wings – a key to the insect’s ability to survive. The wings themselves are common research models for this and other species’ appendages. But until now, scientists did not know how the fruit fly,Drosophila melanogaster, first sprouted tiny buds that became flat wings. A cluster of only 20 or so cells present in the fruit fly’s first day of larval life was analyzed to connect a gene known to be active in the embryo and the gene that triggers the growth of wings. Researchers determined that the known embryonic gene, called Dpp, sends the first signal to launch the activation of a gene called vn. That signal alone is dramatic, because it crosses cell layers. The activation of the vn gene lasts just long enough to turn on a target gene that combines with additional signals to activate genes responsible for cell growth and completion of wing development. “Our work shows how when you add a gene into the equation, you get a wing. The clue is that one growth factor, Dpp, turns on another growth factor, vn, but just for a short period of time. You absolutely need a pulse of this activity to turn on yet another gene cascade that gives you a wing, but if vn is active for too long, a wing wouldn’t form,” said Dr. Amanda Simcox, professor of molecular genetics at The Ohio State University and lead author of the study. “We learned all this from investigating 20 tiny cells. The events could be responsible for this big event in evolutionary history, when the insect got its wing.
Login Or Register To Read Full Story
Login Register