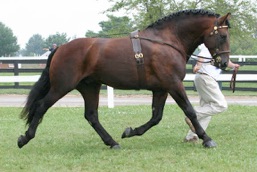 A new study by Dr. Gus Cothran, Professor Emeritus at the Texas A&M School of Veterinary Medicine & Biomedical Sciences (CVM), has found that the Cleveland Bay (CB) horse breed has the third-lowest genetic variation level of domestic horses, ranking above only the notoriously inbred Friesian and Clydesdale breeds. This lack of genetic diversity puts the breed at risk for a variety of health conditions. Genetic variation refers to the differences between different individuals' DNA codes. Populations where there is high genetic diversity will have a wider range of different traits and will be more stable, in part because disease traits will be more diluted. In populations with low genetic variation, many individuals will have the same traits and will be more vulnerable to disease. The CB is the United Kingdom's oldest established horse breed and the only native warm-blood horse in the region. Used for recreational riding, driving, and equestrian competition, the CB is considered a critically endangered breed by the Livestock Conservancy. Because maintaining genetic diversity within the breed is important to securing the horses' future, Dr. Cothran and his team worked to gain comprehensive genetic information about the breed to develop more effective conservation and breeding strategies. In this study, published online on Septembr 20, 2019 in Diversity, researchers genotyped hair from 90 different CB horses and analyzed their data for certain genetic markers. These samples were then compared to each other, as well as to samples from other horse breeds to establish the genetic diversity within the breed and between other breeds.
Login Or Register To Read Full Story
Login Register