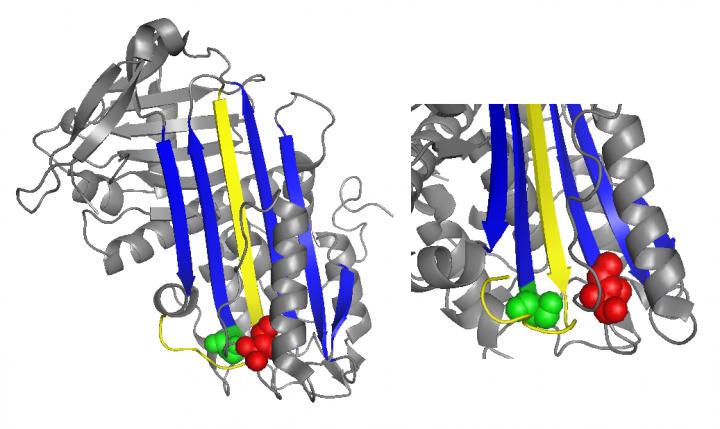 When a person is injured, blood clotting is essential. However, once the danger has passed, it is equally essential to stop the clotting response in order to prevent thrombosis, or the obstruction of blood flow by clots. A protein called antithrombin is responsible for stopping coagulation, but about one in two thousand people have a hereditary deficiency in antithrombin that puts them at much higher risk of life-threatening blood clots. A group of researchers in Spain has analyzed the mutations in the antithrombin proteins of these patients and discovered that a section of the protein plays an unexpected role in its function. This insight into how antithrombin works could lead to treatments not only for patients with antithrombin deficiency, but also to better-designed drugs for other blood disorders. The research, which has been published online, will be published in the October 6, 2017 issue of the Journal of Biological Chemistry. The article is titled “Disease-Causing Mutations in the Serpin Antithrombin Reveal a Key Domain Critical for Inhibiting Protease Activities.” The Centro Regional de Hemodonacion and Hospital Universitario Morales Meseguer of the Universidad de Murcia in Spain is a reference center for the diagnosis of antithrombin deficiency. For over 15 years, researchers at the laboratory have been receiving samples from patients with diverse mutations that affect how their antithrombin works. Antithrombin normally inhibits thrombin by inserting a loop-shaped region, called the reactive center loop, into the active site of the thrombin protein, preventing thrombin from catalyzing clot formation by distorting the shape of the thrombin's active site. Many antithrombin mutations that cause clotting diseases directly or indirectly affect the reactive center loop. However, biochemical studies led by Dr.Irene Martinez-Martinez discovered that mutations in a completely different part of the antithrombin also contributed to its dysfunction. "We saw that we [had] mutants that were affecting the function of the protein even though they were very far from the main part of the protein that is in charge of the inhibition," Dr. Martinez-Martinez said. "People thought that the antithrombin function was mainly focused on one domain of the protein. With this work, we have realized that is not true."
Login Or Register To Read Full Story
Login Register