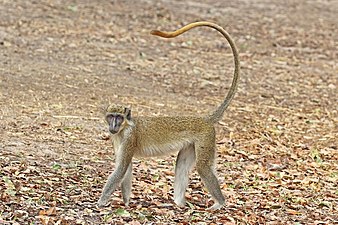 Wound healing events in mucous tissues during early infection by simian immunodeficiency virus (SIV), guard some primate species against developing AIDS, a recent study has learned. The research looked at why certain species can carry the virus throughout their lives, and still avoid disease progression. SIV is closely related to the human immunodeficiency virus (HIV). It is used as a laboratory model for many studies seeking AIDS and HIV cures and preventions. Despite effective treatments to manage HIV, the virus remains a major global health threat. Approximately 37.9 million people in the world are living with an HIV infection. Each year approximately 770,000 people die of AIDS. As yet, there are no clinically available vaccines against HIV, or cures for the infection. In this latest study, reported online on November 8, 2019 in Nature Communications, scientists sought to uncover, in natural hosts, successful virus-fighting tactics that could inform the design of better antiviral drugs to treat HIV in people. The researchers found that the biological events involved in wound healing of mucosal tissues create an environment inside the body that protects against the destructive consequences of SIV infection. (Mucosal tissues are part of the body's defense against germs.) Aspects of this wound-healing immune response could become targets for developing new therapies to prevent AIDS in people with HIV infections.
Login Or Register To Read Full Story
Login Register