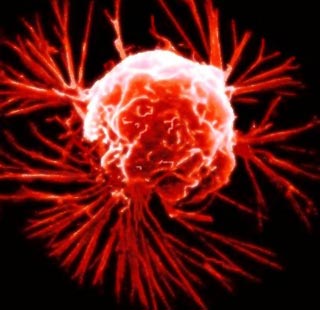 A new study of mutations in cancer genomes suggests how researchers can begin to distinguish the “driver” mutations that push cells towards cancer from the “passenger” mutations that are by-products of cancer cell development. The study also shows that at least one in nine genes, on average, can be removed from human cancer cells without killing the cells. This is in sharp contrast to the corresponding figure for genes in normal human cells [X chromosome (1 in 100 genes); normal human genome (1 in 50 genes)]. Thus, cancer cells seem to be more tolerant to gene loss than the cells of healthy people and can lose a much greater proportion of their genes without losing the ability to live and grow. Many cancer genomes are riddled with mutations. The vast majority of these are likely to be passengers—i.e., mutations that don't contribute to the development of cancer, but have occurred during the growth of the cancer--while a small minority are the critical drivers of cancer growth and proliferation. The challenge of efficiently picking out the guilty drivers in the huge set of mutations found in a cancer genome has yet to be fully met. "It is essential that we can distinguish the drivers from the passengers because knowing the driver mutations, and hence the critical genes they are in, leads to understanding of the cellular processes that have been subverted in cancers, and hence to new drugs," explained the Wellcome Trust Sanger Institute’s Dr. Michael Stratton, senior author of the report. "Our study provides one example of how researchers can sift through the large numbers of a particular type of mutation present in cancer genomes in order to distinguish drivers from passengers."
Login Or Register To Read Full Story
Login Register