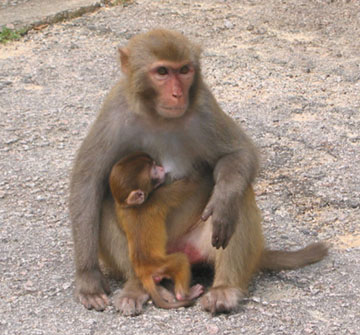 Human babies appear to need more of a nutritional boost from breast-milk proteins than do infants of one of their closest primate relatives, suggests a study comparing human milk with the milk of rhesus macaque monkeys. The research team, led by scientists from the University of California, Davis, came to this conclusion after developing a new technique for comparing the proteome -- all detectable proteins -- of human milk with the proteome of the rhesus macaque monkey. The researchers expect the findings will provide a better understanding of human breast-milk composition and identify fundamental nutrients that should be included in infant formula. The study, which revealed the first comprehensive macaque milk proteome and newly identified 524 human milk proteins, was published online on March 11, 2015 in the Journal of Proteome Research. The article was titled “Comparative Proteomics of Human and Macaque Milk Reveals Species-Specific Nutrition During Post-Natal Development.” "Human milk provides a recipe for human nutrition during the neonatal period," said principal investigator Dr. Danielle Lemay, a Nutritional Biologist at the UC Davis Genome Center. "But because so much remains to be understood about milk's molecular composition, we developed a new technique for analyzing milk proteomics that overcomes earlier barriers," she said. Using this new method, Dr. Lemay and colleagues identified 1,606 proteins in human milk and 518 proteins in rhesus macaque milk. These included 88 milk proteins that were common to both species, but at different levels. Ninety-three percent of those shared proteins were more abundant in human milk than in macaque milk.
Login Or Register To Read Full Story
Login Register