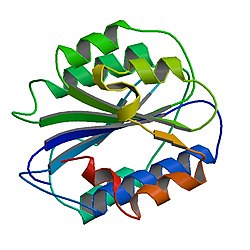 Scientists have shed light on a common bleeding disorder by growing and analyzing stem cells from patients’ blood to discover the cause of the disease in individual patients. The technique may enable doctors to prescribe more effective treatments according to the defects identified in patients' cells. In the future, this approach could go much farther: these same cells could be grown, manipulated, and applied as treatments for diseases of the heart, blood, and circulation, including heart attacks and hemophilia. The new research is reported in an open-access article in the April 4, 2013 issue of the journal Blood. The study focused on von Willebrand disease (vWD), which is estimated to affect 1 in 100 people and can cause excessive, sometimes life-threatening, bleeding. vWD is caused by a deficiency of von Willebrand factor (vWF) (image), a blood component involved in making blood clot. vWF is produced by endothelial cells, which line the inside of every blood vessel in our body. Unfortunately, these cells are difficult to study because taking biopsies from patients is invasive and unpleasant. A group led by Dr. Anna Randi at the National Heart and Lung Institute, Imperial College London, used a new approach to investigate the disease. Dr. Richard Starke, a British Heart Foundation Intermediate Fellow and lead author of the study, took routine blood samples from eight patients with vWD, extracted stem cells called endothelial progenitor cells, and grew them in the lab to yield large numbers of endothelial cells. By testing these cells, the researchers were able to analyze each patient’s disease in unprecedented detail. In some patients, the scientists found new types of defect, which may enable them to recommend improved treatments.
Login Or Register To Read Full Story
Login Register