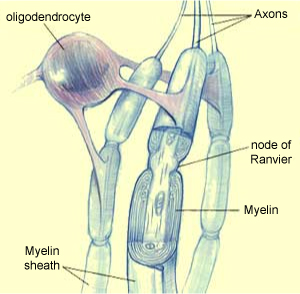 Every week in his clinic at the University of Michigan, neurologist Joseph Corey, M.D., Ph.D., treats patients whose nerves are dying or shrinking due to disease or injury. He sees the pain, the loss of ability, and the other effects that nerve-destroying conditions cause – and wishes he could give patients more effective treatments than what's available, or regenerate their nerves. Then he heads to his research lab at the VA Ann Arbor Healthcare System (VAAAHS), where his team is working toward that exact goal. In new research published in several recent papers, Dr. Corey and his colleagues from the U-M Medical School, VAAAHS, and the University of California, San Francisco (UCSF) report success in developing polymer nanofiber technologies for understanding how nerves form, why they don't reconnect after injury, and what can be done to prevent or slow damage. Using polymer nanofibers thinner than human hairs as scaffolds, researchers coaxed a particular type of brain cell to wrap around nanofibers that mimic the shape and size of nerves found in the body. They've even managed to encourage the process of myelination – the formation of a protective coating that guards larger nerve fibers from damage. They began to see multiple concentric layers of the protective substance called myelin start to form, just as they do in the body. Together with the laboratory team of their collaborator Dr. Jonah Chan at UCSF, the authors reported their findings in Nature Methods online on July 15, 2012. The research involves oligodendrocytes, which are the supporting actors to neurons -- the "stars" of the central nervous system. Without oligodendrocytes, central nervous system neurons can't effectively transmit the electrical signals that control everything from muscle movement to brain function.
Login Or Register To Read Full Story
Login Register