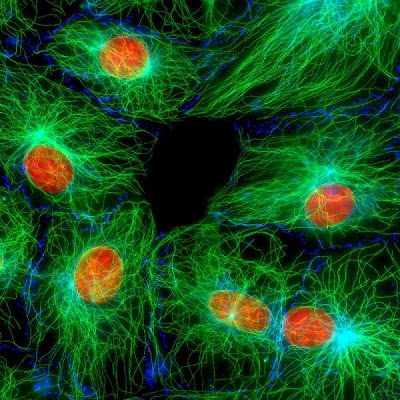 Stanford University School of Medicine scientists have demonstrated, in a study conducted jointly with researchers at Yale University, that induced-pluripotent stem cells (iPS cells) — the embryonic-stem-cell lookalikes whose discovery a few years ago won this year's Nobel Prize in medicine — are not as genetically unstable as was thought. The new study, which was published online on Novenber 18, 2012 in Nature, showed that what seemed to be changes in iPS cells' genetic makeup — presumed to be inflicted either in the course of their generation from adult cells or during their propagation and maintenance in laboratory culture dishes — instead are often accurate reflections of existing but previously undetected genetic variations among the cells comprising our bodies. That's good news for researchers hoping to use the cells to study disease or, someday, for regenerative medicine. But it raises the question of whether and to what extent we humans are really walking mosaics whose constituent cells differ genetically from one to the next in possibly significant respects, said Alexander Urban, Ph.D., assistant professor of psychiatry and behavioral sciences at Stanford. Dr. Urban shared senior authorship of the study with bioinformatics professor Mark Gerstein, Ph.D., and neurobiology professor Flora Vaccarino, M.D., both of Yale. It's only a few years ago that human iPS cells started becoming available to researchers. These cells hold great promise because they act almost exactly like embryonic stem cells, which can be nudged to differentiate into virtually any of the body's roughly 200 different cell types. But iPS cells can be derived easily from a person's skin, alleviating numerous ethical concerns arising from the necessity of obtaining embryonic stem cells from fertilized eggs.
Login Or Register To Read Full Story
Login Register