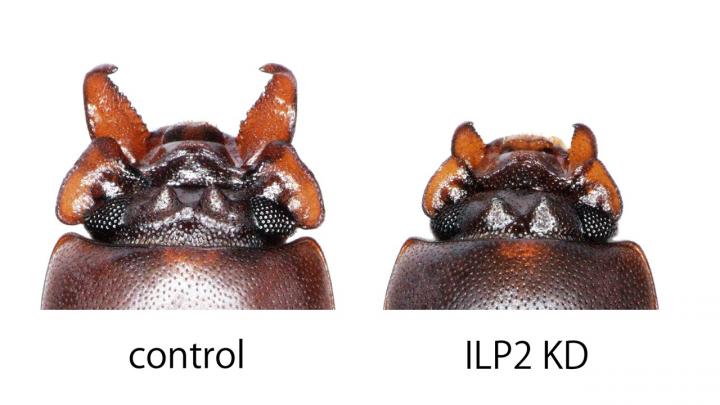 A scientist from Tokyo Metropolitan University and co-workers have discovered that a specific insulin-like peptide called insulin-like peptide 2 (ILP2) regulates the size of "weapons" in Gnatocerus cornutus beetles in different nutritional environments. They found diminished mandible size when expression of the peptide was suppressed, and that it was specifically expressed in the "fat body,” where beetles store nutrients. This has important implications for understanding how striking growth occurs in different environments for different organisms. The findings were published online on November 27, 2019 in PLOS Biology. The open-access article is titled “A Specific Type of Insulin-Like Peptide Regulates the Conditional Growth of a Beetle Weapon.” From deer antlers to beetle horns, the animal kingdom is full of examples of exaggerated ornaments and weapons which derive from sexual selection. Their growth and size may vary significantly from one specimen to another and give rise to distinct mating tactics like fighting, sneaking, or dispersing to areas with less competition. This variation is often correlated with body size or "condition" in a relationship known as positive allometry. Despite the importance of condition-dependent growth of these features, the mechanism behind how the environment affects the complex development of these observable features remains poorly understood. Insulin-like peptides (ILPs) and growth factors (IGFs) are found in a wide range of both invertebrates and vertebrates, like humans, and are thought to play common roles related to growth and metabolism. Recent work into the genetics of insects has revealed a wide variety of ILPs playing different functional roles. Examples include fruit flies which have 8 ILPs, pea aphids with 10 ILPs, and silkworms with over 40 ILPs.
Login Or Register To Read Full Story
Login Register