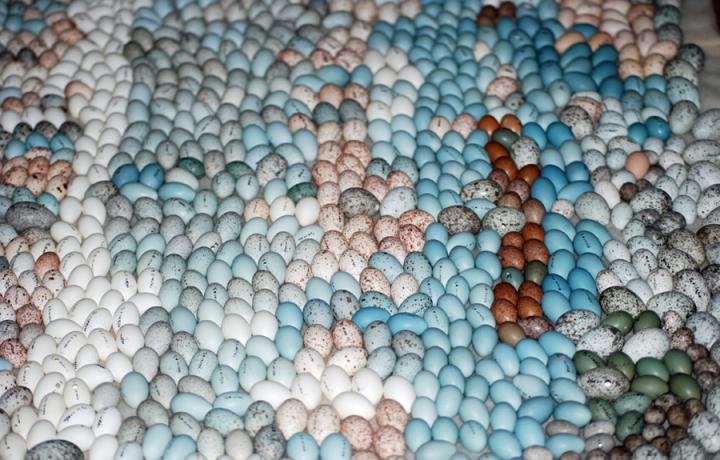 There's a high-stakes arms race being waged with colors and patterns in the scrublands of southern Zambia. It's a battle that's probably being fought everywhere that there are birds practicing what is known as "brood parasitism," i.e., laying their eggs in the nests of another bird species. In a new study, published online in an open-access article on June 17, 2015 in the Proceedings of the Royal Society B, current Duke University graduate student Eleanor Caves found that African songbirds that are frequently victimized by brood parasitic cuckoos have taken to creating elaborate patterns on their eggs to help them recognize the forgeries. This article also serves as the cover story for the July 2015 print issue of the Proceedings of the Royal Society B. The article is titled “Hosts of Brood Parasites Have Evolved Egg Phenotypic Signatures with Elevated Information Content.” But of course this host strategy does not work perfectly, or the war would be over. During her master's research at the University of Cambridge in the UK, Caves methodically examined how two kinds of songbirds pattern their eggs to try to stay one step ahead of two species of parasitic birds. "We don't know at what stage of this evolutionary arms race we're seeing these species," Caves said, but her study has found that birds that are heavily parasitized are able to "sign" their eggs with color and pattern traits in unpredictable combinations. The hundreds of eggs used in her study (see image) had been meticulously collected and catalogued by a retired British military officer, Major John F.R. Colebrook-Robjent, on his ranch in the Choma district of Southern Zambia over a 35-year period. He painstakingly drilled and blew out each of the tiny eggs, and marked them with a set number to indicate which ones belonged in the same clutch.
Login Or Register To Read Full Story
Login Register