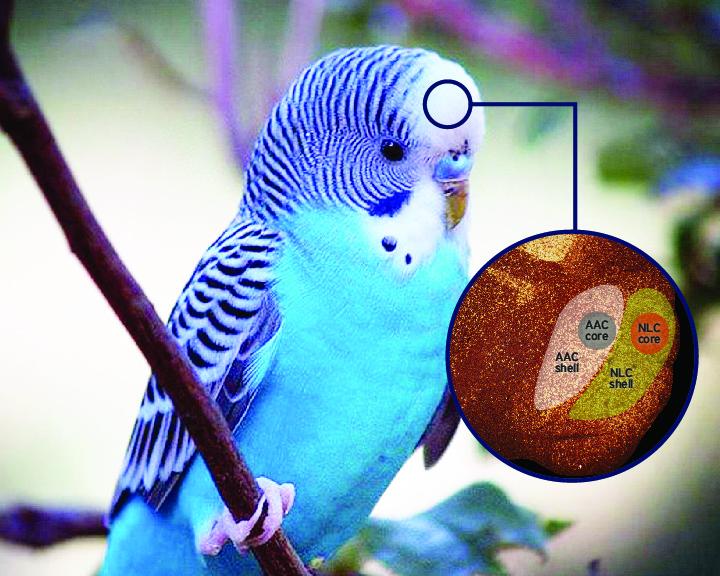 An international team of scientists led by Duke University researchers has uncovered key structural differences in the brains of parrots that may explain the birds' unparalleled ability to imitate sounds and human speech. Described online on June 24, 2015 in the open-access journal PLOS ONE, these brain structures had gone unrecognized in studies published over the last 34 years. The article is titled “Core and Shell Song Systems Unique to the Parrot Brain.” The results also may lend insight into the neural mechanisms of human speech. “This finding opens up a huge avenue of research in parrots, in trying to understand how parrots are processing the information necessary to copy novel sounds and what are the mechanisms that underlie imitation of human speech sounds,” said Dr. Mukta Chakraborty, a post-doctoral researcher in the lab of Dr. Erich Jarvis, an Associate Professor of Neurobiology at Duke and a Howard Hughes Medical Institute Investigator. Parrots are one of the few animals considered “vocal learners,” meaning they can imitate sounds. Researchers have been trying to figure out why some bird species are better imitators than others. Besides differences in the sizes of particular brain regions, however, no other potential explanations have surfaced. By examining gene expression patterns, the new study found that parrot brains are structured differently than the brains of songbirds and hummingbirds, which also exhibit vocal learning. In addition to having defined centers in the brain that control vocal learning called “cores,” parrots have what the scientists call “shells,” or outer rings, which are also involved in vocal learning. The shells are relatively bigger in species of parrots that are well known for their ability to imitate human speech, the group found.
Login Or Register To Read Full Story
Login Register