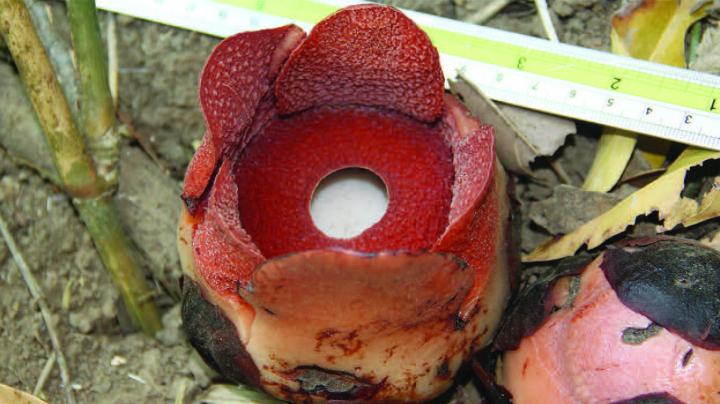 Some of the world's giant flowers, those of the parasitic plant genus Rafflesia, can reach up to a meter and a half in diameter. Therefore, what could be more impressive about them than relative “dwarves” such as the record-breaking one that was recently discovered by scientists from the University of the Philippines Diliman and the University of the Philippines Los Baños. Its average diameter is only 9.73 cm and it has been named Rafflesia consueloae. The study was published online on February 25, 2016 in the open-access journal PhytoKeys. Curiously enough, the discovery happened after a field assistant accidentally tripped over a pile of forest litter to expose a decayed flower. Later on, lead researcher Professor Perry S. Ong would describe the novel finding as "serendipitous." The research article is titled “Rafflesia consueloae (Rafflesiaceae), the Smallest Among Giants; A New Species from Luzon Island, Philippines” "Rafflesia flowers are unique in that they are entirely parasitic on roots and stems of specific vines in the forests and have no distinct roots, stems, or leaves of their own," explains co-author Professor Edwino S. Fernando. "Thus, they are entirely dependent on their host plants for water and nutrients." In Sumatra and Borneo, another species of the same genus, Rafflesia arnoldi, holds the record for being the largest single flower in the world, with a diameter of up to 1.5 meters. In the Philippines, Rafflesia schadenbergiana, found only in Mindanao, is still large, with a flower diameter of 0.8 meters. Professor Fernando, added that Rafflesia consueloae is the 6th Rafflesia species from Luzon Island and the 13th for the entire Philippine archipelago.
Login Or Register To Read Full Story
Login Register