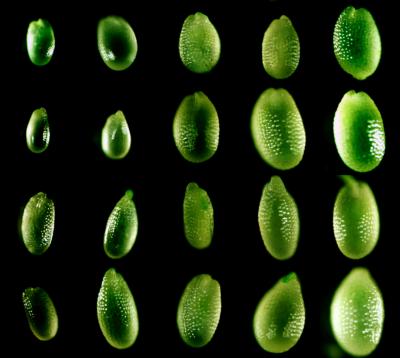 During embryonic development in humans and other mammals, sperm and egg cells are essentially wiped clean of chemical modifications to DNA called epigenetic marks. They are then held in reserve to await fertilization. In flowering plants, the scenario is dramatically different. Germ cells don't even appear until the post-embryonic period – sometimes not until many years later. When they do appear, only some epigenetic marks are wiped away; some remain, carried over from prior generations – although until now little was known about how or to what extent. "What we did know," says Professor and HHMI-GBMF Investigator Rob Martienssen, Ph.D., of Cold Spring Harbor Laboratory (CSHL), "was that epigenetic inheritance – the inheritance by offspring of chemical "tags" present in parental DNA that modify the expression of genes – is much more widespread in plants than in animals." In new research published online on September 20, 2012 in the journal Cell, Dr. Martienssen and colleagues show that genome reprogramming through these epigenetic mechanisms is guided by small RNAs and is passed on to the next generation. It has long been known that in plants, as the male germline pollen grains develop, they give rise to two sperm cells, and a structure called the vegetative nucleus, also known as the "nurse cell" because it provides energy and nourishment to the sperm cells. The DNA in germ cells can exist in two dramatically different states: in one, it is very densely packed and essentially inaccessible to the cellular machinery that enables individual genes to be "expressed." In the other, in which the packing is much looser, genes can be expressed.
Login Or Register To Read Full Story
Login Register