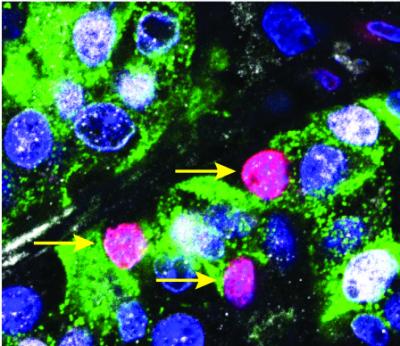 Klaus Kaestner, Ph.D., professor of Genetics and postdoctoral fellow Dana Avrahami, Ph.D., from the Perelman School of Medicine, University of Pennsylvania, published a study online in the Journal of Clinical Investigation, with colleague Benjamin Glaser, M.D., from the Hadassah-Hebrew University Medical Center, Jerusalem, and colleagues. In this study, they were able to replicate human pancreatic beta cells – the cells in our body that produce the critical hormone insulin – in a mouse model in which donor cells were transplanted. The newly replicated cells retained features of mature beta cells and showed a physiological response to glucose. The results of this proof-of-principle experiment have implications for helping both type 1 and type 2 diabetic patients. In type 1 diabetes, beta cells are destroyed by the patient's own immune system and thus restoration of their numbers must be coupled with a method of preventing immune-mediated destruction. Similarly, a decrease in the number of functional insulin-producing beta cells contributes to the development of type 2 diabetes, so in principle, restoration of beta-cell mass can reverse or ameliorate both forms of diabetes. The idea for this study came from newborns with a well-characterized, but rare, condition called hyperinsulinism of infancy, in which beta cells produce too much insulin – the exact opposite of diabetes. The blood sugar levels in these babies are too low. In about one-third of these newborns, most of their pancreatic beta cells are normal, but a small portion of cells lack a specific protein called p57, due to a mutation that occurs in a single or a few beta cells during fetal development.
Login Or Register To Read Full Story
Login Register