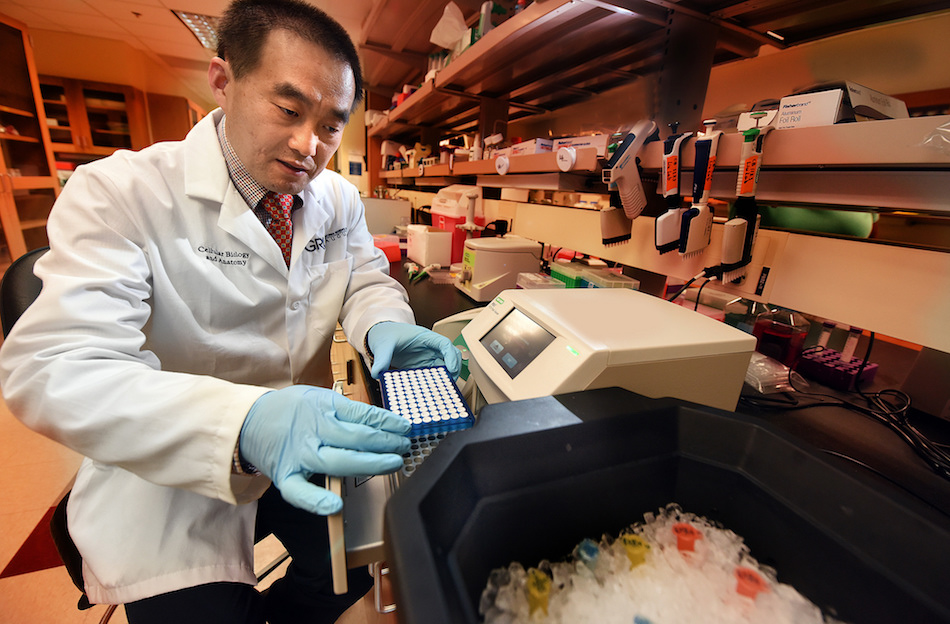 Too much of a short gene that normally has the tall order of helping the eye continuously clear fluid and regulate intraocular pressure appears, instead, to have the opposite effect, and contribute to the most common form of glaucoma. Scientists have found a variation of the miR-182 gene in patients with primary open-angle glaucoma that results in this overexpression, said Dr. Yutao Liu, vision scientist and human geneticist in the Department of Cellular Biology and Anatomy at the Medical College of Georgia at Augusta University. The variant’s impact appears to reduce the ability of the cells in the eye’s trabecular meshwork to continually move the clear aqueous humor out of the front of the eye and release it into the body’s general circulation, said Dr. Liu, corresponding author of the study published in the August 2016 issue of the journal Investigative Ophthalmology & Visual Science. The open-access article is titled “A Common Variant in MIR182 Is Associated with Primary Open-Angle Glaucoma in the NEIGHBORHOOD Consortium.” “Every 90 minutes, it turns over,” Dr. Liu said of the typically balanced process. Because there is no direct blood supply to the front of the eye, the ciliary body just under the colored portion of the eye uses nearby blood to make the fluid to nourish and oxygenate the area, while trabecular meshwork cells near the cornea absorb it and then release it– along with waste products – back into the circulation. In glaucoma, there is a problem with outflow, fluid production, or both, which results in increased pressure inside the eyeball that damages the optic nerve and can destroy vision. While current therapies help normalize pressure, they typically only slow disease progression.
Login Or Register To Read Full Story
Login Register