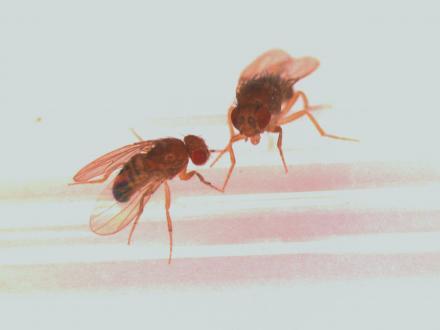 If you're a human who's really hungry, a handful of nuts, a piece of cheese or a nice juicy steak may really hit the spot. If you're a fruit fly, a nibble of yeast will do the trick. Why do we - and those flies that sometimes inhabit our kitchens - seek out protein-full foods when we're running on empty? And what does that preference mean for the odds of living a longer life, whether it's measured in decades for a human, or days for a fly? New research from a University of Michigan Medical School team suggests for the first time that a brain chemical may have a lot to do with both questions. In a new paper in the journal eLife, U-M scientist Scott Pletcher, Ph.D., and his team demonstrate the key role that the chemical called serotonin plays in the feeding habits and life spans of fruit flies. The paper's first author is Jennifer Ro, Ph.D., now at Harvard Medical School. The open-access article is titled “Serotonin Signaling Mediates Protein Valuation and Aging.” Serotonin is a "reward" chemical, which means when it's released in the brain in response to an action, it travels between brain cells and produces a sense of reward or even pleasure. Dr. Pletcher and his team report that serotonin appears to play a key role in fruit flies' strong tendency to seek out protein, not sugars, when they've been deprived of food for a while. In other words, it affects the value that flies place on protein at that time -- which means that it's somehow tied to how the flies figure out which foods contain protein in the first place.Not only that, but the brain-based reward that the flies got from eating protein appears to influence how quickly the flies aged. When that reward was blocked, the flies ate just as much food as before in their normal diets - but lived far longer.
Login Or Register To Read Full Story
Login Register