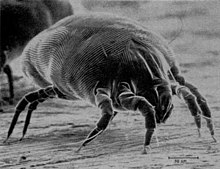 In evolutionary biology, there is a deeply rooted supposition that you can't go home again: Once an organism has evolved specialized traits, it can't return to the lifestyle of its ancestors. There's even a name for this pervasive idea. Dollo's law states that evolution is unidirectional and irreversible. But this "law" is not universally accepted and is the topic of heated debate among biologists. Now a research team led by two University of Michigan (U-M) biologists has used a large-scale genetic study of the lowly house dust mite to uncover an example of reversible evolution that appears to violate Dollo's law. The study shows that tiny free-living house dust mites, which thrive in the mattresses, sofas, and carpets of even the cleanest homes, evolved from parasites, which in turn evolved from free-living organisms millions of years ago. "All our analyses conclusively demonstrated that house dust mites have abandoned a parasitic lifestyle, secondarily becoming free-living, and then speciated in several habitats, including human habitations," according to Dr. Pavel Klimov and Dr. Barry O’Connor of the U-M Department of Ecology and Evolutionary Biology. Their paper is scheduled to be published online on March 8, 2013 in the journal Systematic Biology. Mites are arachnids related to spiders (both have eight legs) and are among the most diverse animals on Earth. House dust mites, members of the family Pyroglyphidae, are the most common cause of allergic symptoms in humans, affecting up to 1.2 billion people worldwide. Despite their huge impact on human health, the evolutionary relationships between these speck-sized creatures are poorly understood. According to Drs.
Login Or Register To Read Full Story
Login Register