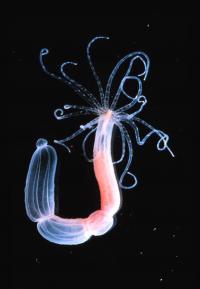 A team led by evolutionary and developmental biologist Dr. Ulrich Technau at the University of Vienna has discovered that sea anemones display a genomic landscape with a complexity of regulatory elements similar to that of fruit flies or other animal model systems. This suggests, that this principle of gene regulation is already 600 million years old and dates back to the common ancestor of human, fly, and sea anemone. On the other hand, sea anemones are more similar to plants rather thn to vertebrates or insects in their regulation of gene expression by short regulatory RNAs called microRNAs. These surprising evolutionary findings were published on March 18, 2014 in two open-access articles in Genome Research. Our appearance, the shape we have and how our body works is, in addition to environmental influences, largely the result of the action of our genes. However, genes are rarely single players, they rather act in concert and regulate each other's activity and expression in gene regulatory networks. In the last decades, the sequencing of the human and many animal genomes has shown that anatomically simple organisms such as sea anemones have a surprisingly complex gene repertoire similar to that of higher model organisms. This implies, that the difference in morphological complexity cannot be easily explained by the presence or absence of individual genes. Some researchers hypothesized that the individual genes do not code for more complex body plans, but that this is determined by how the genes are wired and linked between each other. Accordingly, researchers expected that these gene networks are less complex in simple organisms than in human or "higher" animals. A measurement of the complexity of gene regulation could be the distribution and density of regulatory sequences in the genome.
Login Or Register To Read Full Story
Login Register