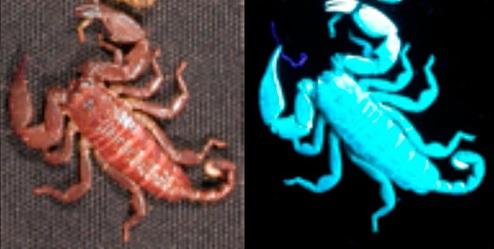 Most scorpions glow a blue-green color when illuminated by ultraviolet light or natural moonlight. Scientists aren't sure how this fluorescence benefits the creatures, but some have speculated that it acts as a sunscreen, or helps them find mates in the dark. Now, researchers reporting in the American Chemical Society’s Journal of Natural Products have identified a new fluorescent compound from scorpion exoskeletons. The team says that the compound could protect these arachnids from parasites. The article was published on February 3, 2020, and is titled “A Fluorescent Compound from the Exuviae of the Scorpion, Liocheles australasiae.” More than 60 years ago, scientists first recognized scorpions' propensity to glow under UV light. Until now, only two fluorescent compounds, β-carboline and 7-hydroxy-4-methylcoumarin, had been identified in scorpions' hard outer shell, or exoskeleton. Masahiro Miyashita and colleagues wondered if there might be other fluorescent molecules with different chemical properties that were missed in previous studies. To find out, the researchers extracted compounds from molted exoskeletons of the scorpion Liocheles australasiae, using chemical conditions different from those used in prior experiments. They purified the compound showing the most intense fluorescence and identified its structure, which was a phthalate ester previously shown to have antifungal and anti-parasitic properties in other organisms. This finding suggests that the new molecule, which the researchers found in several additional scorpion species, could help guard against parasitic infections in these creatures. Compared with the two previously identified fluorescent compounds, the new molecule likely contributes more weakly to scorpion fluorescence, the scientists say.
Login Or Register To Read Full Story
Login Register