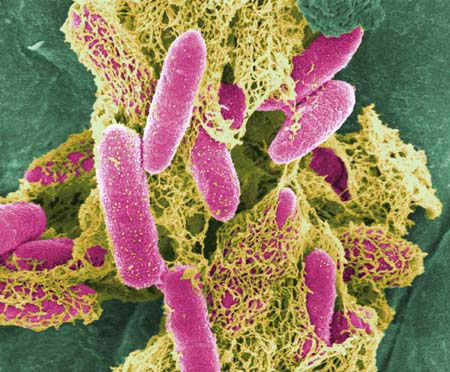 By discovering sulpho-glycolysis, researchers of the University of Konstanz have revealed an important degradation pathway. Similarly to the sugar glucose, its sulphurous analogue sulpho-glucose is produced by all photosynthetically active organisms. The annual production of sulpho-glucose in nature is estimated at approximately ten billion tons. Researchers of the Department of Biology of the University of Konstanz, in Germany, led by the microbiologists Dr. David Schleheck and Professor Dr. Alasdair Cook, and supported by colleagues from the Department of Chemistry, have now revealed how sulpho-glucose is degraded. The scientists could identify one degradation pathway in the bacterium Escherichia coli (image), the most widely studied bacterial model organism: the sulpho-glycolytic pathway, encoded by ten genes, whose function had remained unknown thus far. The results have now been published in the online edition of Nature. Sulpho-glucose is present in all plants, mosses, ferns, and algae. The degradation pathway, or metabolic pathway, for sulpho-glucose, sulpho-glycolysis, is therefore an important component of the material cycles in ecosystems. As sulpho-glucose is not commercially available, Dr. Thomas Huhn of the neighboring Department of Chemistry synthesised this special form of sugar in sufficient amounts and purity for study. The analytical-chemical studies to give proof of intermediates were conducted via modern mass spectrometry by the doctoral student Alexander Schneider and the chemists Profesor Dr. Christoph Mayer, now at the University of Tübingen, and Professor Dr. Dieter Spiteller. "The excellent collaboration between biologists and chemists was an important aspect of our work.
Login Or Register To Read Full Story
Login Register