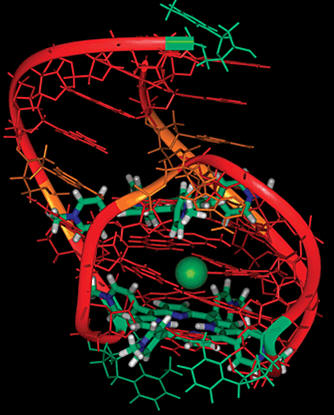 Some designers of anti-cancer drugs are investigating mysterious chunks of the genetic material DNA that may play a key role in preventing the growth and spread of cancer cells, according to an article in the November 2 issue of Chemical & Engineering News, the weekly newsmagazine of the American Chemical Society. In the article, C&EN Deputy Assistant Managing editor Stu Borman notes that the DNA structures, which scientists term "quadruplexes" because they have four-sided structures, are a genre of folded DNA that may help control whether genes are switched on or off. Quadruplexes sometimes form near genes that foster the growth of cancer cells. Some scientists thus regard them as promising targets for developing new anti-cancer drugs. Drugs that interact with quadruplexes could help kill cancer cells without harming healthy cells. In addition, they may side-step the serious problem of drug resistance, in which some drugs gradually lose their effectiveness against cancer. The C&EN article describes research on quadruplex-targeted drugs and explores the mysteries about how quadruplexes form, disappear, and function. [Press release] [C&EN article]
Login Or Register To Read Full Story
Login Register