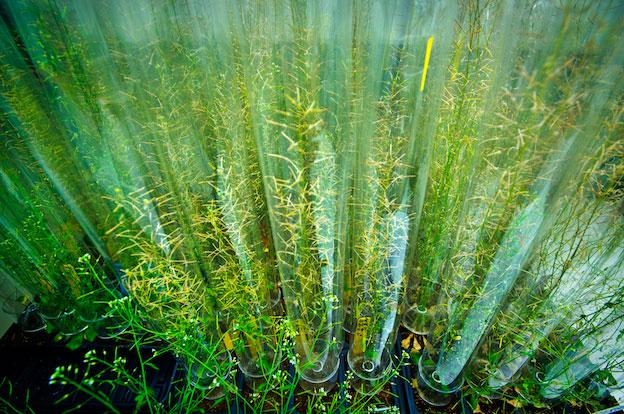 A bacterial signal that, when recognized by rice plants, enables the plants to resist a devastating blight disease has been identified by a multi-national team of researchers led by scientists with the U.S. Department of Energy (DOE)'s Joint BioEnergy Institute (JBEI) and the University of California (UC) Davis. The research team discovered that a tyrosine-sulfated bacterial protein called "RaxX," activates the rice immune receptor protein called "XA21." This activation triggers an immune response against Xanthomonas oryzaepv.oryzae (Xoo), a pathogen that causes bacterial blight, a serious disease of rice crops. "Our results show that RaxX, a small, previously undescribed bacterial protein, is required for activation of XA21-mediated immunity to Xoo," says Dr. Pamela Ronald, a plant geneticist for both JBEI and UC Davis, who led this study. "XA21 can detect RaxX and quickly mobilize its defenses to mount a potent immune response against Xoo. Rice plants that do not carry the XA21 immune receptor or other related immune receptors are virtually defenseless against bacterial blight." Dr. Ronald, who directs JBEI's grass genetics program and is a professor in the UC Davis Department of Plant Pathology, is one of two corresponding authors of an open-access paper describing this research that was published in the July 3, 2015 issue of Science Advances. The other corresponding author was Dr. Benjamin Schwessinger, a grass geneticist with JBEI's Feedstocks Division at the time of this study, and now with the Australian National University. The Science Advances paper is titled "The Rice Immune Receptor XA21 Recognizes a Tyrosine-Sulfated Protein from a Gram-Negative Bacterium."
Login Or Register To Read Full Story
Login Register