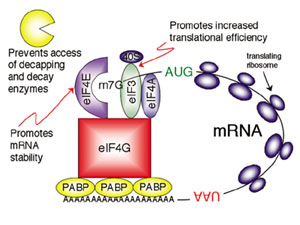 In cells, DNA is first converted to RNA, and RNA is next converted to proteins--a complicated process involving several other steps. Nonsense-mediated RNA decay (NMD) is a processing pathway in cells that, like a broom, cleans up erroneous RNA to prevent its productive conversion into an aberrant protein, which could lead to disease. In some diseases, like amyotrophic lateral sclerosis (ALS, also called Lou Gehrig's disease), excessive junk RNA is produced, possibly contributing to the disease. In such instances, more NMD is useful to get rid of the junk RNA. In other diseases, such as muscular dystrophy and cystic fibrosis, a decrease in NMD is a better option. In these diseases, the NMD pathway eliminates the RNA, resulting in a complete loss of the gene function. But a defective RNA may translate to a semi-functional protein, which is better than no RNA for protein formation in cells. And so, a tuned-down NMD is more useful. Dr. Sika Zheng, an Assistant Professor of Biomedical Sciences in the School of Medicine at the University of California, Riverside, and colleagues now report in the journal RNA (volume 23, no.3, March 2017 issue) that they have come up with a method in the lab that detects NMD efficiency inside the cell. The article is titled “Inhibition of Nonsense-Mediated RNA Decay by ER Stress.” "Our method can screen a host of chemicals and allows us to identify molecules that regulate this efficiency," Dr. Zheng said. "We have already identified thapsigargin as a molecule that indirectly and robustly inhibits NMD." The new method works by harnessing some normal targets of NMD and turning them into "reporters" of NMD activity. The method relies on the knowledge that NMD is more than a quality-control mechanism; it can also determine the level of some naturally occurring RNA.
Login Or Register To Read Full Story
Login Register