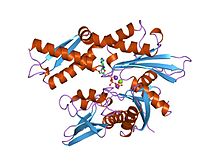 A recent study from the University of Michigan (U-M) Life Sciences Institute and the University of California, San Francisco (UCSF), has opened new options to further develop a potential cancer-fighting therapy, clearing an early hurdle in the lengthy drug-discovery process. The findings, published online on December 18, 2017 in the Journal of Biological Chemistry (JBC), reveal new ways to measure the activity of a protein that is associated with poor prognosis in cancer patients -- heat shock protein 70 (Hsp70) (image) -- and remove a barrier to developing potential Hsp70-based therapies. The article is titled “X-Linked Inhibitor of Apoptosis Protein (XIAP) is a Client of Heat Shock Protein 70 (Hsp70) and a Biomarker of Its Inhibition.” The significance of these findings led the study to be chosen as the JBC Editors' Pick for the upcoming February 16, 2018 issue. This honor is reserved for the top 2 percent of the more than 6,600 papers published in the journal each year, in terms of the overall importance of the research. When Hsp70 is present at increased levels, cancer cells are more likely to survive and become resistant to chemotherapeutics. Conversely, when this protein is inhibited in cells, tumor cells are less able to divide, and they eventually die. Because of its apparent role in cancer cell survival, researchers are interested in developing drugs that block the protein's activity. But these efforts have been hindered by a lack of Hsp70 biomarkers -- measurable surrogates that scientists can evaluate to ensure the compounds they are testing really do what they are supposed to do. Scientists have found some small molecules that affect Hsp70 in an artificial environment, where they can directly measure Hsp70 activity.
Login Or Register To Read Full Story
Login Register