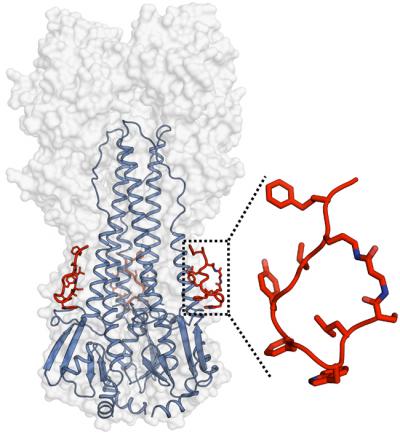 A team of researchers from The Scripps Research Institute (TSRI) and Janssen Research & Development (Janssen) has devised artificial peptide molecules that neutralize a broad range of influenza virus strains. Peptides are short chains of amino acids - like proteins but with smaller, simpler structures. These designed molecules have the potential to be developed into medicines that target influenza, which causes up to 500,000 deaths worldwide each year and costs Americans billions of dollars in sick days and lost productivity. The developed peptides block the infectivity of most circulating strains of group 1 influenza A viruses, including H5N1, an avian flu strain that has caused hundreds of human infections and deaths in Asia, and the H1N1 swine flu strain that caused a global pandemic in 2009-10. The scientists designed the peptides to mimic the virus-gripping regions of two recently discovered "super-antibodies" that are known to neutralize virtually all influenza A strains. Antibodies are large proteins that are expensive to produce and must be delivered by injection or infusion--whereas, "the peptides developed in the study have the potential to be medicines delivered via pill-based drugs in the future." "Making small molecules that do essentially what these larger, broadly neutralizing antibodies do is a really exciting and promising strategy against influenza, as our new results show," said co-senior investigator Dr. Ian Wilson, Hansen Professor of Structural Biology at TSRI. The report on the new peptides appeared as an online First Release paper in Science on September 27, 2017. The article is titled “"Potent Peptidic Fusion Inhibitors of Influenza Virus." The two anti-flu super-antibodies on which these peptides are based, called FI6v3 and CR9114, were discovered in 2011 and 2012. Since then, Dr. Wilson's laboratory at TSRI, in partnership with Janssen and other structural biology laboratories around the world, have mapped at atomic scale how these and other broadly neutralizing antibodies bind to flu viruses.
Login Or Register To Read Full Story
Login Register