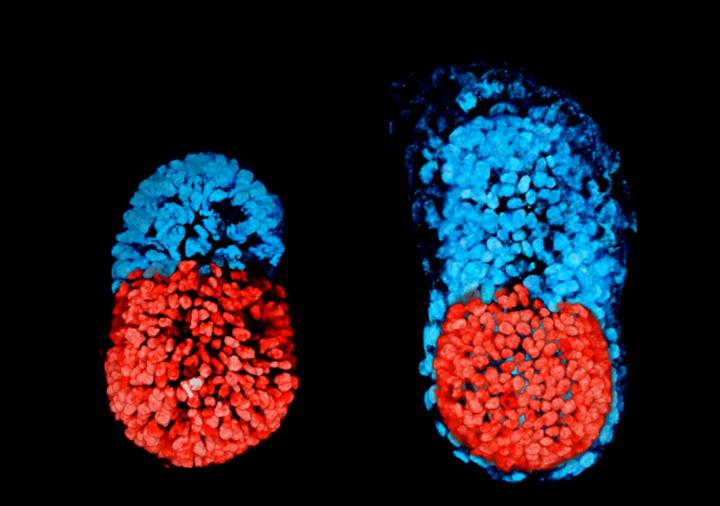 Scientists at the University of Cambridge in the UK have managed to create a structure resembling a mouse embryo in culture, using two types of stem cells - the body's “master cells” - and a 3D scaffold on which the cells can grow. Understanding the very early stages of embryo development is of interest because this knowledge may help explain why more than two out of three human pregnancies fail at this time. Once a mammalian egg has been fertilized by a sperm, it divides multiple times to generate a small, free-floating ball of stem cells. The particular stem cells that will eventually make the future body, the embryonic stem cells (ESCs), cluster together inside the embryo towards one end: this stage of development is known as the blastocyst. The other two types of stem cell in the blastocyst are the extra-embryonic trophoblast stem cells (TSCs), which will form the placenta; and the primitive endoderm stem cells that will form the so-called yolk sac, ensuring that the fetus's organs develop properly and providing essential nutrients. Previous attempts to grow embryo-like structures using only ESCs have had limited success. This is because early embryo development requires the different types of cell to coordinate closely with each other. Now, however, in a study published online on March 2, 2017 in Science, University of Cambridge researchers describe how, using a combination of genetically-modified mouse ESCs and TSCs, together with a 3D scaffold known as an extracellular matrix (ECM), they were able to grow a structure capable of assembling itself and whose development and architecture very closely resembled the natural mouse embryo.
Login Or Register To Read Full Story
Login Register