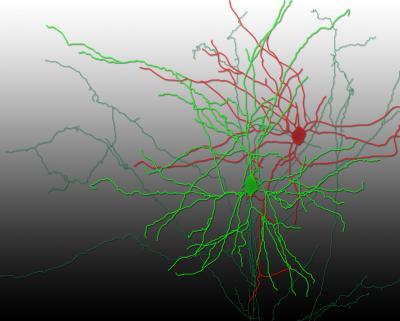 Neurons, the cells of the nervous system, communicate by transmitting chemical signals to each other through junctions called synapses. This "synaptic transmission" is critical for the brain and the spinal cord to quickly process the huge amount of incoming stimuli and generate outgoing signals. However, studying synaptic transmission in living animals is very difficult, and researchers have to use artificial conditions that don't capture the real-life environment of neurons. Now, EPFL (Ecole Polytechnique Federale de Lausanne) scientists in Switzerland have observed and measured synaptic transmission in a live animal for the first time, using a new approach that combines genetics with the physics of light. Their breakthrough work was published online on December 24, 2014 in an open-access artic le in Neuron. Drs. Aurélie Pala and Carl Petersen at EPFL's Brain Mind Institute used a novel technique called "optogenetics" that has been making significant inroads in the field of neuroscience in the past ten years. This method uses light to precisely control the activity of specific neurons in living, even moving, animals in real time. Such precision is critical in being able to study the hundreds of different neuron types, and understand higher brain functions such as thought, behavior, language, memory - or even mental disorders. Optogenetics works by inserting the gene of a light-sensitive protein into live neurons, from a single cell to an entire family of cells. The genetically modified neurons then produce the light-sensitive protein, which positions itself on the outside of the cell, on the membrane. There, it acts as an electrical channel - something like a gate. When light is shone on the neuron, the channel opens up and allows electrical ions to flow into the cell, a bit like a battery being charged by a solar cell.
Login Or Register To Read Full Story
Login Register