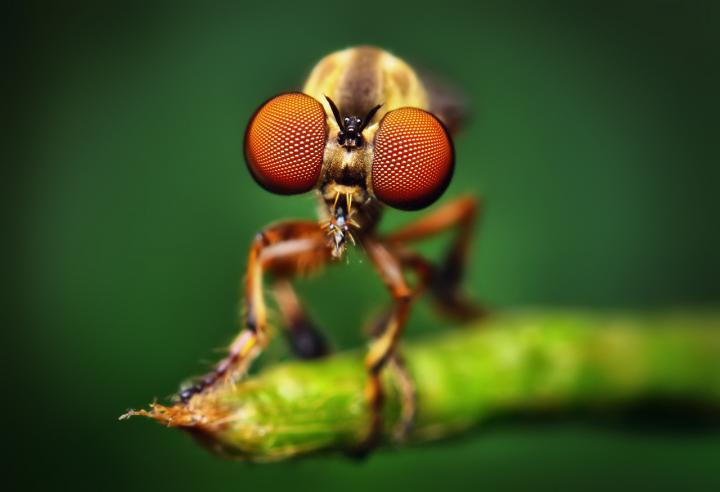 You might expect that the miniature brains and eyes of tiny robber flies would limit their ability to launch sophisticated in-flight predatory attacks on their prey. But, according to researchers reporting in Current Biology on March 9, 2017 who've captured the rice-sized predators' tactics on film, that is not so. The open-access article is titled “A Novel Interception Strategy in a Miniature Robber Fly with Extreme Visual Acuity.” The movies show that robber flies sit and wait for a tempting prey item (or a bead) to fly past. Once they do, the flies take off using an interception strategy known as constant bearing angle (CBA), keeping their prey at a constant angle to ensure that they'll eventually meet. That's impressive, but there's more. Once the robber fly reaches a distance of about 30 centimeters from its target, it "locks on," slowing down and curving its flight path to make a successful catch even more likely. Their secret to pulling it off is all in the eyes. "We knew that these flies likely had an improved vision compared to other true flies, but we never imagined that they would give dragonflies, which are ten times larger, a run for their money with regards to spatial resolution of the retina," says Dr. Paloma Gonzalez-Bellido of the University of Cambridge. "Likewise, although we expected these flies to employ CBA, we were surprised by their use of a lock-on phase to ease the capture." The researchers, including Dr. Gonzalez-Bellido and Dr. Trevor Wardill, made their discovery by presenting flies in their natural habitats with beads ranging from about 1 to 4 millimeters in diameter on a fishing line. They recorded the flies' reaction to seeing one of those beads zoom past using two high-speed video cameras. The films allowed them to reconstruct the insects' precise flight trajectories in three dimensions.
Login Or Register To Read Full Story
Login Register