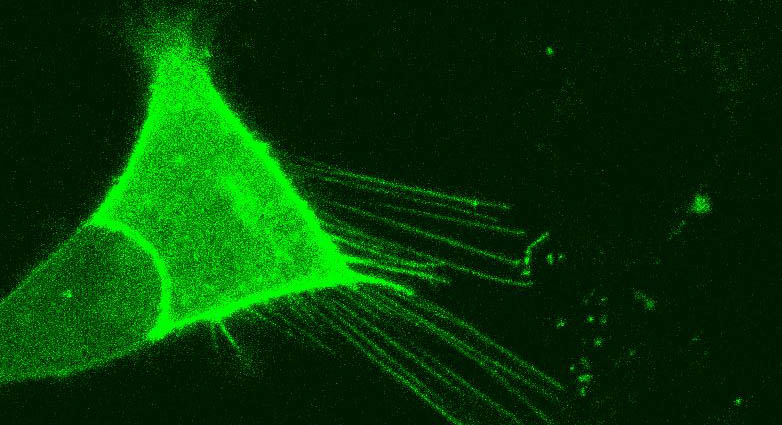 A toxic protein (huntingtin) linked to Huntington’s disease can move from neuron to neuron through a nanotube tunnel whose construction is initiated by a protein called Rhes, say scientists at Scripps Research-Florida. The finding, by Scripps Research neuroscientist Srinivasa Subramaniam, PhD, improves understanding of how and why this disease attacks and destroys certain brain cells. The research was published online on May 10, 2019 in Journal of Cell Biology. The article is titled “Rhes Travels from Cell to Cell and Transports Huntington Disease Protein Via TNT-Like Cellular Protrusions.” “We are excited about this result because it may explain why the patient gets the disease in this area of the brain called the striatum,” says Dr. Subramaniam, an Associate Professor in the Department of Neuroscience at Scripps Research-Florida. People with Huntington’s disease inherit a mutant gene that codes for an aberrant protein that is somehow complicit in destroying brain cells. Scientists discovered this protein in 1993, but are still piecing together its role in this degenerative disease. Scans show Huntington’s disease brains are shrunken and degraded. As the neurons deteriorate, people lose motor control, they can have emotional problems, and their thinking and memory suffer. Symptoms usually begin around age 30 to 40 and last 15 to 20 years until death. A rarer and more aggressive form of the disease affects children, cutting their childhood and their lives short. About 3 to 7 people out of 100,000 have the disease and it has mostly affected those with European ancestry. However, Dr. Subramaniam believes the disease is underreported in other areas, such as India. “There is a lot of stigma associated with the disease,” says Subramaniam.
Login Or Register To Read Full Story
Login Register