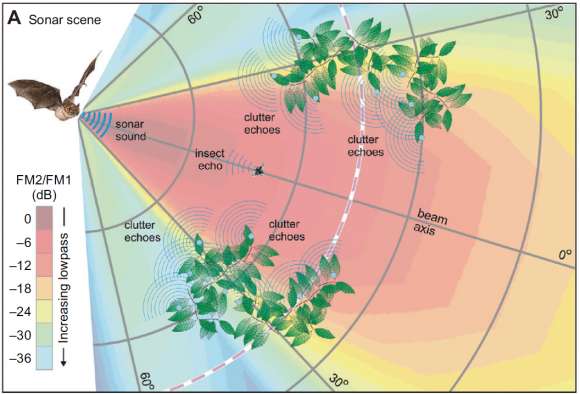 Amid a neuroscience debate about how people and animals focus on distinct objects within cluttered scenes, some of the newest and best evidence comes from the way bats “see” with their ears, according to a new paper in the August 15, 2014 issue of the Journal of Experimental Biology. In fact, the perception process in question could be used to improve sonar and radar technology. Bats demonstrate remarkable skill in tracking targets such as bugs through the trees in the dark of night. Dr. James Simmons, professor of neuroscience at Brown University, the review paper’s author, has long sought to explain how they do that. It turns out that experiments in Dr. Simmons’ lab point to the “temporal binding hypothesis” as an explanation. The hypothesis proposes that people and animals focus on objects versus the background when a set of neurons in the brain attuned to features of an object all respond in synchrony, as if shouting in unison, “Yes, look at that!” When the neurons do not respond together to an object, the hypothesis predicts, an object is relegated to the perceptual background. Because bats have an especially acute need to track prey through crowded scenes, albeit with echolocation rather than vision, they have evolved to become an ideal testbed for the hypothesis. “Sometimes the most critical questions about systems in biology that relate to humans are best approached by using an animal species whose lifestyle requires that the system in question be exaggerated in some functional sense so its qualities are more obvious,” said Dr. Simmons, who plans to discuss the research at the 2014 Cold Spring Harbor Asia Conference the week of September 15, 2014 in Suzhou, China. Here’s how he’s determined over the years that temporal binding works in a bat.
Login Or Register To Read Full Story
Login Register