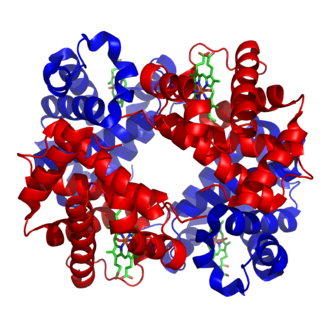 Most biological processes are carried out by complexes of multiple proteins that work together to carry out some function. How these complicated structures could have evolved is one of modern biology's great puzzles, because the proteins generally stick together using elaborate molecular interfaces, and the intermediate forms through which they came into being have been lost without a trace. Now, an international team of researchers led by University of Chicago Professor Joseph Thornton, PhD, and graduate student Arvind Pillai has revealed that complexity can evolve through surprisingly simple mechanisms. The group identified the evolutionary "missing link" through which hemoglobin--the essential four-part protein complex that transports oxygen in the blood of virtually all vertebrate animals--evolved from simple precursors. And they found that it took just two mutations more than 400 million years ago to trigger the emergence of modern hemoglobin's structure and function. The study, titled "Origin of Complexity in Haemoglobin Evolution," was published online in Nature on May 20, 2020. The research team also includes scientists at Texas A&M University, the University of Nebraska-Lincoln, and Oxford University (UK). Each hemoglobin molecule is a four-part protein complex made up of two copies each of two different proteins, but the proteins to which they are most closely related do not form complexes at all. The team's strategy, pioneered in Dr. Thornton's lab over the last two decades, was a kind of molecular time travel: use statistical and biochemical methods to reconstruct and experimentally characterize ancient proteins before, during, and after the evolution of the earliest forms of hemoglobin.
Login Or Register To Read Full Story
Login Register