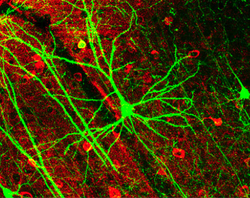 The field of cell therapy, which aims to form new cells in the body in order to cure disease, has taken another important step in the development towards new treatments. A new report from researchers at Lund University in Sweden shows that it is possible to re-program other cells to become nerve cells, directly in the brain. Two years ago, researchers in Lund were the first in the world to re-program human skin cells, known as fibroblasts, to dopamine-producing nerve cells – without taking a detour via the stem cell stage. The research group has now gone a step further and shown that it is possible to re-programme both skin cells and support cells directly to nerve cells, in place in the brain. “The findings are the first important evidence that it is possible to re-program other cells to become nerve cells inside the brain,” said Dr. Malin Parmar, research group leader and Reader in Neurobiology. The researchers used genes designed to be activated or de-activated using a drug. The genes were inserted into two types of human cells: fibroblasts and glia cells – support cells that are naturally present in the brain. Once the researchers had transplanted the cells into the brains of rats, the genes were activated using a drug in the animals’ drinking water. The cells then began their transformation into nerve cells. In a separate experiment on mice, where similar genes were injected into the mice’s brains, the research group also succeeded in re-programming the mice’s own glia cells to become nerve cells. “The research findings have the potential to open the way for alternatives to cell transplants in the future, which would remove previous obstacles to research, such as the difficulty of getting the brain to accept foreign cells, and the risk of tumor development,” said Dr. Parmar.
Login Or Register To Read Full Story
Login Register