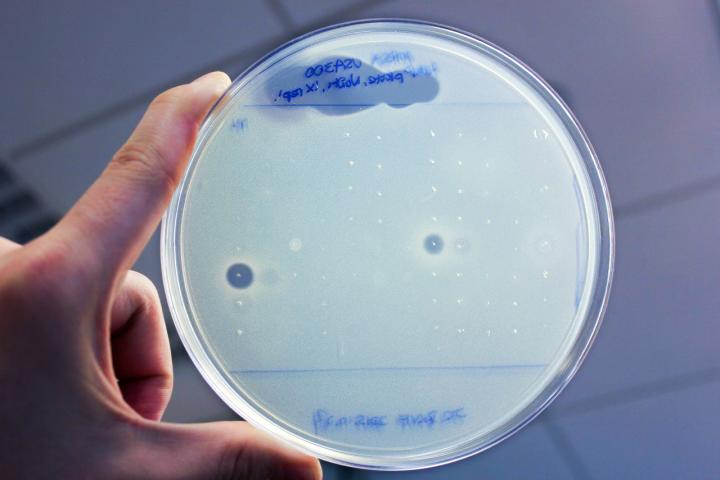 Most antibiotics in use today are based on natural molecules produced by bacteria--and given the rise of antibiotic resistance, there's an urgent need to find more of them. Yet coaxing bacteria to produce new antibiotics is a tricky proposition. Most bacteria won't grow in the lab. And even when they do, most of the genes that cause them to churn out molecules with antibiotic properties never get switched on. Researchers at The Rockefeller University have found a way around these problems, however. By using computational methods to identify which genes in a microbe's genome ought to produce antibiotic compounds and then synthesizing those compounds themselves, they were able to discover two promising new antibiotics without having to culture a single bacterium. The Rockefeller team, which was led by Dr. Sean Brady, Head of the Laboratory of Genetically Encoded Small Molecules, began by trawling publicly available databases for the genomes of bacteria that reside in the human body. Th scientists then used specialized computer software to scan hundreds of those genomes for clusters of genes that were likely to produce molecules known as non-ribosomal peptides that form the basis of many antibiotics. They also used the software to predict the chemical structures of the molecules that the gene clusters ought to produce. Unearthing the humimycins The software initially identified 57 potentially useful gene clusters, which the researchers winnowed down to 30. Dr. Brady and his colleagues then used a method called solid-phase peptide synthesis to manufacture 25 different chemical compounds. By testing those compounds against human pathogens, the researchers successfully identified two closely related antibiotics, which they dubbed humimycin A and humimycin B.
Login Or Register To Read Full Story
Login Register