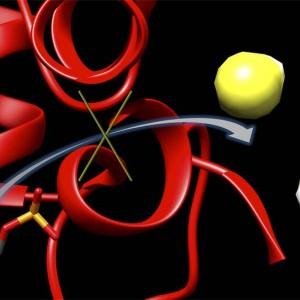 Research teams separated by 9,000 miles have collaborated to advance prospective treatment for stroke, the world's second-leading cause of death. University of Nebraska-Lincoln (UNL) chemists partnered with medical researchers from the National University of Singapore to develop a molecule that can inhibit an enzyme linked with the onset of stroke. Most strokes occur when a disruption of blood flow prevents oxygen and glucose from reaching brain tissue, ultimately killing neurons and other cells. The team found that its molecule, known as 6S, reduced the death of brain tissue by as much as 66 percent when administered to the cerebrum of a rat that had recently suffered a stroke. It also appeared to reduce the inflammation that typically accompanies stroke, which the World Health Organization has estimated kills more than 6 million people annually. "The fact that this inhibitor remained effective when given as post-stroke treatment ... is encouraging, as this is the norm in the treatment of acute stroke," the researchers reported in a study published on March 9, 2016 in the journal ACS Central Science. The open-access article is titled “’Zipped Synthesis’ by Cross-Metathesis Provides a Cystathionine β-Synthase Inhibitor that Attenuates Cellular H2S Levels and Reduces Neuronal Infarction in a Rat Ischemic Stroke Model.” The inhibitor works by binding to cystathionine beta-synthase, (CBS) - an enzyme that normally helps regulate cellular function but can also trigger production of toxic levels of hydrogen sulfide in the brain. Though hydrogen sulfide is an important signaling molecule at normal concentrations, stroke patients exhibit elevated concentrations believed to initiate the brain damage they often suffer.
Login Or Register To Read Full Story
Login Register